Imagine walking into your office to find this notice on your fax machine. 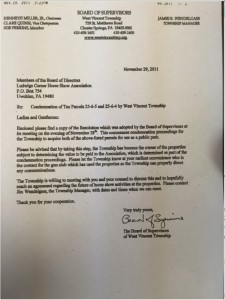 Unless you have ever been on the receiving end of such a letter, you may never know the gut wrenching feeling that comes over you. To think that what you and hundreds before you worked hard to achieve has been stripped away by the stroke of a pen.

No explanation, no discussion, just a fax sent early in the morning.

This is what happened to the Ludwig’s Corner Horse Show Association on November 29, 2011. Immediately the Horse Show Board of Directors jumped into action to attempt to stop the resolution signed by Supervisors Ken Miller, Claire Quinn and Zoe Perkins. The Horse Show Association quickly learned that they had no control over the pending Eminent Domain. They were informed they should have been told the price the Township was offering, however they were never given an amount. At the time, the Horse Show Grounds were valued at 4 million dollars.

Below are some facts the Horse Show learned about the Eminent Domain process and the Township’s actions in those first few days:

The revision of history is appalling and troublesome:

Ken Miller writes in a recent release concerning Eminent Domain “The township failed to communicate its intentions to the community and the Horse Show”.

Actually, they attempted to subdue any public reaction at the time of action.

Prior to the very next Board of Supervisors Meeting, representatives of the horse show requested the meeting be moved to a larger facility to accommodate the expected crowd. That request was denied. Hundreds of people showed up to protest the action. Prior to the start of that meeting, the supervisors requested the LCHS President and his wife to meet privately with the supervisors, the township manager and the solicitor in a back room. They were asked if they would quiet down the crowd in exchange for a promise that the township would entertain a vote to rescind the Eminent Domain action at their next Board of Supervisors meeting claiming they did not have a quorum for a vote (they did). No promise was made on the vote outcome, they just promised a vote.

The next Board of Supervisors Meeting, the Horse Show was told they would not be put on the agenda. They also were told that if they showed up, they would NOT be heard.   The Horse Show Association once again filled the room with protesters of the action. The protestors arrived early to find the township doors locked, the supervisors were inside the building. It was a bitter cold evening. The Horse Show president then made a plea to the Township police to unlock the doors, only then were they opened. When the Supervisors entered the room, they immediately told the gathered crowd there would NOT be a vote at the meeting.

When the Board of Supervisors finally decided to rescind the Eminent Domain Action weeks later, they insisted on one condition: That condition was:

“The Ludwig’s Corner Horse Show Association agrees to pay their own legal fees”. The result was thousands of dollars wasted to overturn an ill-conceived plan.

Why the Horse Show did not believe the Township Supervisors regarding the “shared” use of the grounds as ballfields and horse show grounds. They believe the “commercial” side of the property offered the most interest to the township.

The Township could not answer how the grounds would be co-used as ball fields and grounds for a horse show. The annual Labor Day Horse Show encompasses 100% of the grounds with horses, trailers, cars, amusement and food vendors. Understanding the damage made to turf under such use, there is not much room left for ballfields, not to mention the manure left for weeks after the Horse show.

1943, a group of farm owners planned a horse show over the Labor Day Weekend with the thought of legging-up their horses for the coming hunting season as well as an opportunity to gather neighbors and friends for outdoor entertainment. The group rented a property from Mr. & Mrs. Brunner on the corner of Route 100 and Birchrun Road, paying $100 for the use of the land for the show. 88 horses competed in the first show. The show continued for 5 years on the Brunner Farm.

1948 The show purchased the McBride property, 18+ acres, for $3,500. The parcel currently constitutes about half of the current show grounds. Promissory notes, sold in $25 increments, were purchased by members to make the land acquisition possible. All were repaid within 5 years.

Today, the Ludwig’s Corner Horse Show Association owns 33 acres near the corner of Routes 100 and 401 in Glenmoore, PA.  There are three rings for competition and one for warm up. The now three-day event additionally features a country fair with horse-drawn carriages, and antique car show, rides, games, concessions and vendors, and will often attract up to 25,000 spectators, weather permitting. Our record number of horses at the show, 615, was set in 2010. The show has become a beloved tradition for riders and visitors alike.

🎉 The Ludwig's Corner Horse Show is excited to

Posted @withrepost • @levante_ludwigs Are you re

Visit @levante_ludwigs at the show grounds this we

This weekend at the show grounds 👇🏻 • @a

This weekend at the show grounds • Beer Garden,

At the show grounds this Saturday! First pitch is

At the show grounds this weekend Posted @withrep

Looking for a fun, safe & family environment to tr

Did you compete at Ludwig’s Labor Day weekend? W