In 1943, Chester County, PA was a predominantly rural area with a strong tradition of foxhunting, horse sports and farm ownership.  Hunts like Pickering, Mr. Stewart’s Cheshire Hounds, and Kimberton Hunt had followers from throughout the county who kept their horses stabled at their own farms.  With a thought to legging-up their horses for the coming season as well as to gather neighbors and friends for outdoor entertainment, a group local property owners, including Mr. Frank H. Ellis III, Dr. Paul Jepson, Mr. Calvin Unger, Mr. Roy Rogers, and Mr. Joseph Myer planned a horse show to be held on Labor Day.

The group rented a property from Mr. and Mrs. Brunner on the corner of Route 100 and Birchrun Rd., paying $100 for the use of the land for the show. All of the members contributed time, effort and money to purchase supplies and build a ring, and invited their friends to get involved. In this first year, 88 horses competed in the show under sunny skies, netting $688, which was contributed to the local Boy Scouts troop.

Pleased with the results of their inaugural effort, the founding committee opened membership to the general public and became an organization focused on hosting the annual Labor Day weekend horse show.  For the first five years, the show continued to be held at the Brunner Farm.

By 1947, the show had become very popular with the local community, with spectators standing 4 and 5 people deep to watch the riding. When the Brunners decided to no longer rent the property for the show, a committee was established to find a suitable permanent home for the show.  In 1948, the show purchased the McBride property, constituting 18+ acres, for $3,500.    This parcel currently constitutes about half of our current show grounds.  Promissory notes, sold in $25 increments, were purchased by members to make the land acquisition possible. All were repaid within 5 years. Additional revenue was used to install a 275’ x 150’ ring and for fence improvements.

Attendance at the 1948 show, the first at its own show grounds, was reported to be very large.  The spectators cheered on the 150 horses in competition.  We do not know the exact number of spectators, but board minutes show that 3,000 admission tickets and 500 patron passes were printed.

In the 1960’s, when the show lasted for five days, Mary Warner Brown inaugurated the carriage-driving competition which attracted carriages from throughout the east coast. Ring 2 was dedicated in honor of the many contributions of Ethel Shaw.

Today, the Ludwig’s Corner Horse Show Association owns 33 acres on the corner of Routes 100 and 401 in Glenmoore, PA.  There are three rings for competition and one for warm up. The now three-day event additionally features a country fair with horse-drawn carriages, an antique car show, rides, games, concessions and vendors, and will often attract up to 15,000 spectators, weather permitting. Our record number of horses at the show, 615, was set in 2010. The show has become a beloved tradition for riders and visitors alike.

Maintenance of the facilities and grounds is ongoing.  A master plan for improvements to the property was developed in 1998, and the most recent improvements include:  the completion of ring 3 with improved footing and fencing in 2005, replacement of wooden bleachers with aluminum bleachers through a matching grant from the Chester County Tourist Bureau and the Rosato Foundation, the addition of a permanent storage building in 2009, the addition of the schooling ring in 2011 with a matching grant from the Berry Foundation, and the addition of a permanent announcer’s stand and sound system in 2014, thanks again to a grant from the Berry Foundation.

In 2010, the mortgage on the property was satisfied, leaving the grounds unencumbered for the future. With the loan satisfied, the focus of the Board is to continue capital improvements while maintaining the existing facilities. Rental of the show grounds from May-October each year supplements income from show entries and sponsorship.

In 2011 LCHSA was confronted with a challenge from The West Vincent Township Board of Supervisors, in the form of a vote to take possession of the show grounds under eminent domain.  Public support for the show was immediate and resounding in the form of heavy participation in two public rallies and open supervisors meetings and from the County Commissioners. The Township backed off of its initiative, and there has been no further attempt to condemn the LCHSA grounds.

In 2014, the Board focused on re-invention of the Country Fair portion of the annual show, with increased rides and games to attract families as well as a fresh look at the vendor area.  The Pet Parade was a hit, bringing many new people to the event. The 2014 Berry grant brought a permanent announcer’s booth and state-of-the-art sound equipment to Ludwig’s Corner and a tractor.

In 2015, recognizing increased competition from new horse shows, our planning included significant changes to the prize list, with additions of divisions for off-the-track thoroughbreds – sponsored by the Jockey Club Thoroughbred Incentive Program, creating Hunter Derbies for horses & ponies, and in-hand classes.  As well, we continue to innovate the country fair, bringing in new rides and activities.  Publicity via both traditional and social media take place year round; LCHSA is now active on Facebook, Twitter, Instagram & Mail Chimp, among others.

In 2016, we were approached by the Brandywine Valley Convention & Visitors Bureau to be considered as a site for a major country music festival, along with two other potential locations. Our show grounds were chosen in 2017 as the site of the “Citadel Country Spirit USA” August 2018 three-day show, featuring major acts like Alabama, Toby Keith and Brad Paisley. This event returned in 2019 with headliners of Little Big Town, Brothers Osborne, Old Dominion, Billy Currington and others, and returns in 2020 with similar big name artists.

Maintenance and improvements to the grounds and competition rings are continual. Upgrades around the show grounds are uppermost were our plans again this past year, which included the purchase of a large tractor & ring drag  courtesy of the Rosato Foundation, and improvements to our show office and judge’s booths. Our plan, as we celebrate our 77th anniversary, is to continue as a traditional horse show & country fair, while providing open space for habitat and for local sports teams, Pony Club,  community events, fairs & festivals — as well as for area residents for dog walks and kite flying. 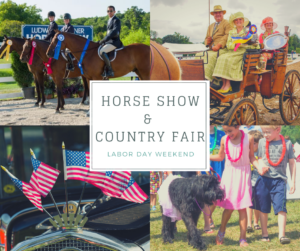 Next weekend at the show grounds ⬇️ • @salt

At the show grounds this Sunday - August 9th! @ki

Thank you 😊 to @ushunterjumper for branded swag

Many thanks 😊 to Grand Champion Sponsor at the

This weekend at the show grounds ⬇️ @saltperfo

Thank you ☺️ to Bits Of Tack for sponsoring ou

Enjoy open schooling at the grounds in The Rosato

▶️ With COVID19 challenges, LCHSA will not be

The 2️⃣0️⃣2️⃣0️⃣ horse show will h

There is still time to support LCHSA & the #horses

Thanks to • @eqxpert.treats for supplying Variet