The sport of Mounted Horseback Archery is one of the fastest growing sports in the world today. It is considered a martial art and finds its roots in the ancient art of warfare, where proper technique allowed the arrows to pierce armor. Scythians, Huns and Mongols were some of the original warriors that used horse archers in wartime. Through archaeological findings and historical recordings, the origins of Mounted Archery can be traced to the ancient Scythians back in the 9th century BC. Mounted Archery has been resurrected from antiquity where it was a way of life, both as prayer and a martial art. Today it is a fast paced, always evolving sport that anyone can do. As a sport, it has been popular in Europe and Asia for some time. The comeback started in Hungary in the late 1990’s and it spread through Europe and into the US by 2003. The World Horseback Archery Championships are held annually in Korea.

Mounted archery has been a worldwide competitive sport since 2005. It can be divided into two different types of competition: sport track or field archery. Sport tracks are the traditional form of competition and are what is recognized around the world. Sport tracks are a 90-meter course with barriers to guide the horse, allowing the archer to concentrate on shot accuracy. Field archery has been developed here in the United States and requires the rider to steer and navigate the course while also making the best possible shot. Time is a factor in both the sport track setting and the field archery. There is a set par time; coming in under par will earn the archer bonus points while coming in over time will cause the archer to have points subtracted from their score. Even though instructors still place a lot of focus on the traditional form that created armor piercing rounds, there are many course formats that appeal to a variety of equestrian styles. The competition courses include barrel racing, cross-country, duels, traditional Korean & Hungarian, Texas hunt course and a Comanche attack course.

MEET the HORSE ARCHERS that ride with UNITED LIBERTY

Kellie Andrews and her students are experienced Ludwig’s Corner Horse Show  competitors who have helped bring a new equestrian sport to PA and now to Ludwig’s Corner Horse show, mounted archery. Kellie ran the PA Open 3 years, has been training MA horses and doing MA since 2015. She has competed at the Texas Open. She is a Level 2 certified MA archer and instructor. Her facility hosted all of the mounted archery clinics in PAs in 2015. By 2016 she was traveling with Ted Staudt to do clinics throughout PA. MA has spread to multiple clubs in multiple areas now. Look for one near you or ask about hosting a clinic or having private lessons.

Jamie took up mounted archery in 2016 at the age of 42. She already was familiar with riding, but had to learn archery. Jamie is a certified level 1 horse archery instructor. Jamie is from Green Lane PA and has 5 horses. She enjoys the empowerment and the connection, originating from ancient warriors, between horse and archer. Mounted archery has given Jamie the opportunity to travel to competitions in Texas, Georgia and Indiana to date. She hopes to add to that list of locations in the future.

Ted is a traditionally trained Hunter/Jumper rider who graduated from Findlay College with a degree in Equine Studies and Equine Business Management. When he moved back to Pennsylvania in 2015 he was looking for something to do with horses that was fun and exciting. In the summer of 2015 he started taking horseback archery lessons from Trey Schlichting. Ted is now in in his fourth year competing as a mounted archer. In October 2017, Ted competed in the 13th World Horse Archery Championships in Sokcho South Korea. At the Championships he competed in both the individual competition and on one of the three US teams. His team was called Cultural – Heritage Revival. Come cheer Ted on at his next competition, The Mason-Dixon Challenge, on September 29th in New Town, Pa.

Jada will be a senior at Souderton Area High School this year. She is president of her 4-H horse club in Montgomery County. She started mounted archery in 2015. Jada was already a rider and knew how to shoot a compound bow, but had to learn the horse bow. Jada is from Green Lane PA and has 5 horses. Jada enjoys mounted archery because it gives her the opportunity to travel and meet people from all over the country and the world. When not doing mounted archery Jada competes in IEA hunt seat, Gymkhana and Ranch Horse riding.

Trey started a mounted archery school in Texas in 2009. Since then he has been a top ten competitor international competitor. He has competed in Mongolia, Korea, Jordan, Austrailia, etc. Last year he won Texas, Michigan, Georgia and Pennsylvania state championships. He is currently on the US mounted archery team.

Horseback Archery can be done by anyone of any age and any riding discipline. We encourage you to find an instructor or club in your area and try it out. There will be multiple certified Mounted Archery instructors available to talk to at the Ludwig’s Corner Horse Show and demo rider will be there all Saturday. Please feel free to ask them about other demos, private lessons and clinics. 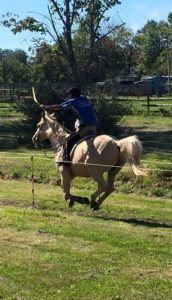 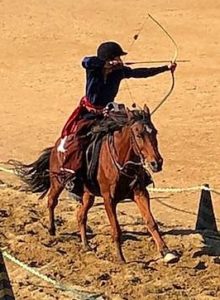 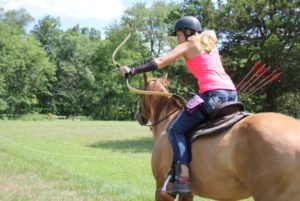