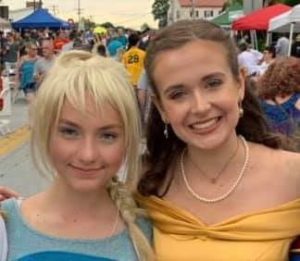 Parents!
Belle and Elsa will be making a limited two day appearance at the Ludwig’s Corner Horse Show & Country Fair on  Saturday August 31 and Sunday September 1 from 12 PM to 4 PM each day! They are very excited to make your acquaintance so stop by the SALT Performing Arts tent at the Country Fair to say hello and snap a picture with royalty!

The Crucible
September 6-15
The Crucible is a 1953 play by American playwright Arthur Miller. It is a dramatized and partially fictionalized story of the Salem witch trials that took place in the Massachusetts Bay Colony during 1692–93. Miller wrote the play as an allegory for McCarthyism, when the United States government persecuted people accused of being communists. SALT has reimagined the play into modern day. https://www.saltpa.com/crucible

MAMMA MIA
October 11 – 27
Over 60 million people worldwide have fallen in love with the characters, the story, and the music that make Mamma Mia! the ultimate feel-good show! ABBA’s hits tell the hilarious story of a young woman’s search for her birth father. This sunny and funny tale unfolds on a Greek island paradise. On the eve of her wedding, a daughter’s quest to discover the identity of her father brings three men from her mother’s past back to the island they last visited 20 years ago. The story-telling magic of ABBA’s timeless songs by an incredibly talented cast propels this enchanting tale of love, laughter, and friendship, creating an unforgettable show. https://www.saltpa.com/mammamia
​